In our last article we saw how to install Kali Linux on a Raspberry Pi and connect to it remotely from a Windows system. This time we will look at how to run some basic pentesting tools including Wi-Fi monitoring.

For example, here we ran a simple nmap scan:

Most of the commands that run in regular Kali Linux have no problems running on the Raspberry Pi. But I did run into some snags.

For Example, I tried running Metasploit on mine, but gave up after it seemed to take forever to come up. I also tried running the Social Engineering Toolkit (se-toolkit from command prompt). Even parts of this gave random errors, thought it did look very cool:

Wireless Penetration testing with the Kali on PI worked very well, and was a lot of fun.

Just Plug your USB Wi-Fi adapter into the PI. 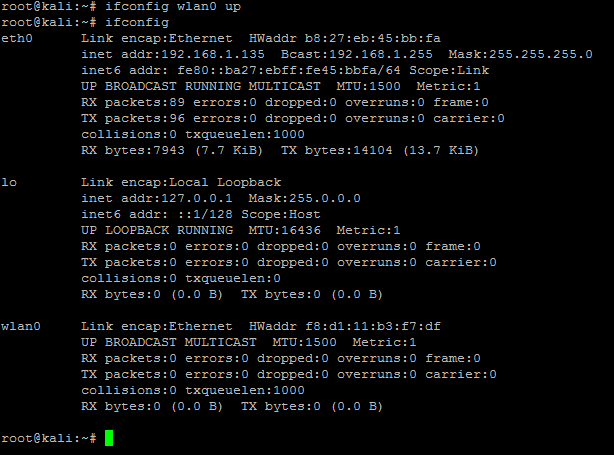 Next let’s see what networks our wireless card can see.

Very cool, it is working. Now let’s run some of the basic Aircrack-NG tools.

First we need to put our wireless adapter into monitoring mode.

This creates a new wireless adapter called mon0. Now we can use this interface to capture wireless management and control frames.

Normally you would just run Wireshark and tell it to capture packets from the mon0 interface. Well, I was remotely logged into Kali and couldn’t run Wireshark through Putty as it is a graphical program.

So I just used tcpdump instead.

This will display all the management and control communication for all wireless networks within the reach of your Wi-Fi adapter.

So with just a few short commands, we were able to perform basic Wi-Fi monitoring with Kali Linux on a Raspberry Pi.

How cool is that?

This is just a basic look at using the aircrack-NG tools on Kali.

For more information check out “Hacking Wi-Fi Networks with Fern, Kali and a Raspberry Pi“

*** Note – as always do not access networks that you do not own or have permission to do so. ***

This site uses Akismet to reduce spam. Learn how your comment data is processed.